As a Subaru owner, I must say, all-wheel-drive is an absolute blessing. They’re safe and reliable, are capable off-road, and likely some of the safest vehicles on-road. Sadly, if swinging the rear end out brings you unbridled joy and makes you giggle like a schoolgirl, what you’re after is a rear-wheel-drive coupe. While there are some good options on the market in the $25,000 range, we’re here to talk about some of the classics. Here are ten of the best cheap RWD cars available.

It’s no shocker that the Miata made this list, so we’re going to go ahead and get it out of the way now. Introduced in 1989, the Miata has been restyled through four generations to date: the NA, NB, NC, and now, ND. While ND models are gorgeous and alluring, the NA and NB models (first and second generation) are your best bet for affordable fun cars. The NC trim is also affordable, but mostly because it was widely regarded as the worst Miata made. The Mazda soul is still detectable, but it is a much more proper car compared to the wild capabilities of the early generations.

With the Mazda Miata, you’ll have an absolute blast driving around town, competing in autocross events, or even taking it to the local track. With used models available between $4,000-$7,000, this one really is a no-brainer. Though the car makes a pathetic 116 horsepower, weight reduction is the name of the game. The car’s borderline anorexic curb weight of just 2,100 lbs gives it the ability to handle corners with ease and handle like an absolute dream. Without a doubt, this is one of the best cheap RWD cars ever made.

As far as cheap cars go, this one is not exactly the most budget-friendly car on the list. Due to its profoundly young age, the Fiat 124 sits comfortably around $22,000 for used examples. What you’ll get for that money, however, is something quite special. Remember the Fiat 500 Abarth? Well, this car features the same turbo-four, which makes 160 hp and 184 lb-ft of torque. In a car that weighs 2,400 lbs, this translates to handling that is strikingly similar to that of a Miata. Essentially, if you’re in the market for a cheaper fun car and you’re not quite sold on the new Miata, this may be the car for you. 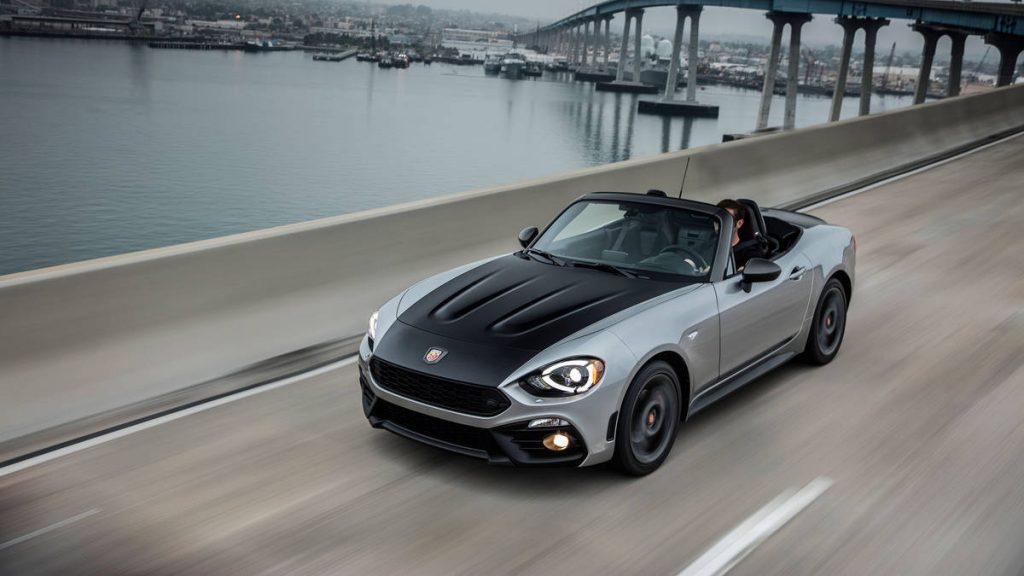 Speaking of the Miata, the 124 Spider actually features the same 6-speed manual gearbox as the NC iteration! In fact, there are more than a few shared parts between the cars, as Mazda played a role in the development of the 124 as well. The 124 claims to sports “a good level of comfort with very low body roll,” which means you can expect it to have a stiffer and more agile approach than the Miata.

As one of the still newer models on this list, with an inception date of 2012, the FR-S might strike you as being too expensive, but you can actually expect to find some early used models between $10,000-$14,000. Still not as affordable as the Miata, but it’s definitely as recognizable as one.

The Scion FR-S/Subaru BRZ/Toyota 86 shook the marketplace when it entered, resulting in hundreds of thousands of the things hitting the streets. It’s a car that blew up seemingly overnight, and while many mock it for being underpowered or overly common, it’s actually got some strong points.

For starters, there’s the genuine Subaru boxer engine under the hood which, as we all know, is as reliable as they come (as long as it’s naturally aspirated, that is).  In a 2,700 lb car, the 200 hp motor is more than capable of some light-hearted fun. The car also features some exceptionally tight handling and is really quite small and maneuverable. Not to mention the aftermarket. This is one of the most highly customizable cars out there and with its nice long bonnet, it’s also prime for an engine swap. It’s not the most affordable of the cheap RWD cars out there, but it does make a great build platform!

Nissan has undeniably always been the favorite choice for RWD JDM enthusiasts. With such an astonishing pedigree (more on that later) and line of heroic predecessors, the 350Z was poised for success before the first model rolled off the line. Let me tell you what, this may be one of the heaviest cars on this list, weighing in around 3,400 lbs, but Nissan knows a thing or two about weight distribution. In short, this is a car that knows how to slide, and teaches us that the secret is to be low and wide. 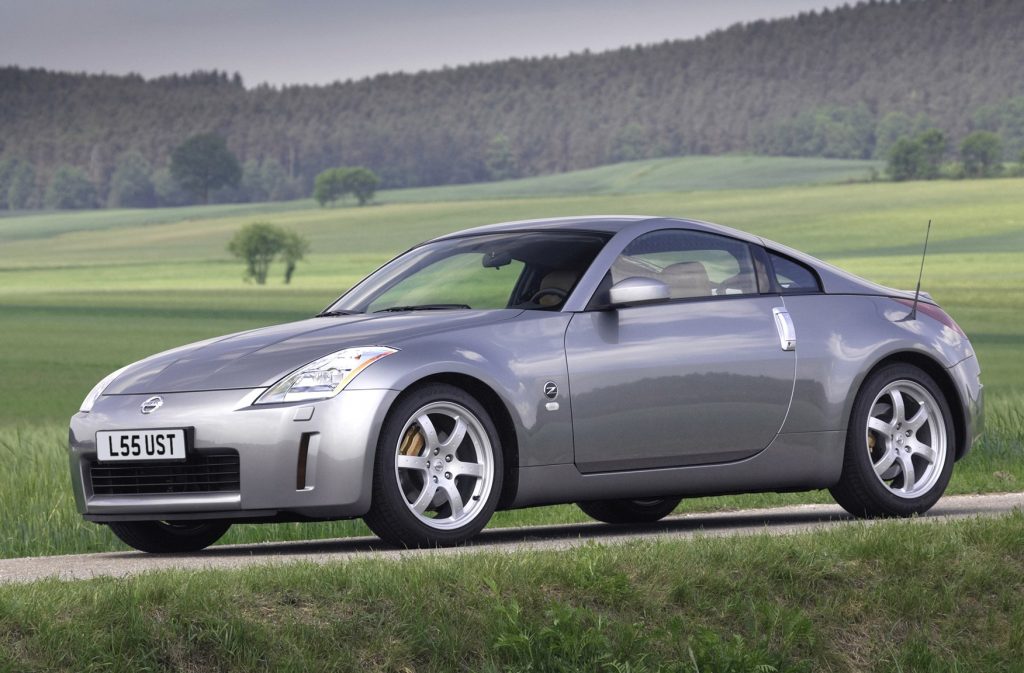 While earlier models will saddle you with a capable 287 hp V6, 2007 and later models received a 306 hp update (also it’s got Bluetooth). Again, this is a very customizable car, one that’s great for racing or drifting, and if you treat the exhaust right, it’ll produce a note out the tailpipe that’ll make you swoon. Expect to pay between $8k-$13k for one of these bad boys, depending on what year and trim you choose.

Arguably the most underrated cheap rear wheel drive car on this list, the Toyota MR2 has still managed to steal the hearts of many over the years. The first unique thing about this car is that it is a mid-engined rear-wheel-drive coupe. The second? It was designed, in part, with help from Lotus. Specifically, the handling and suspension – some of the best parts about a Lotus. Finally, the first generation actually featured an optional supercharged I4. How cool is that? Also, it weighs 2,200 lbs. 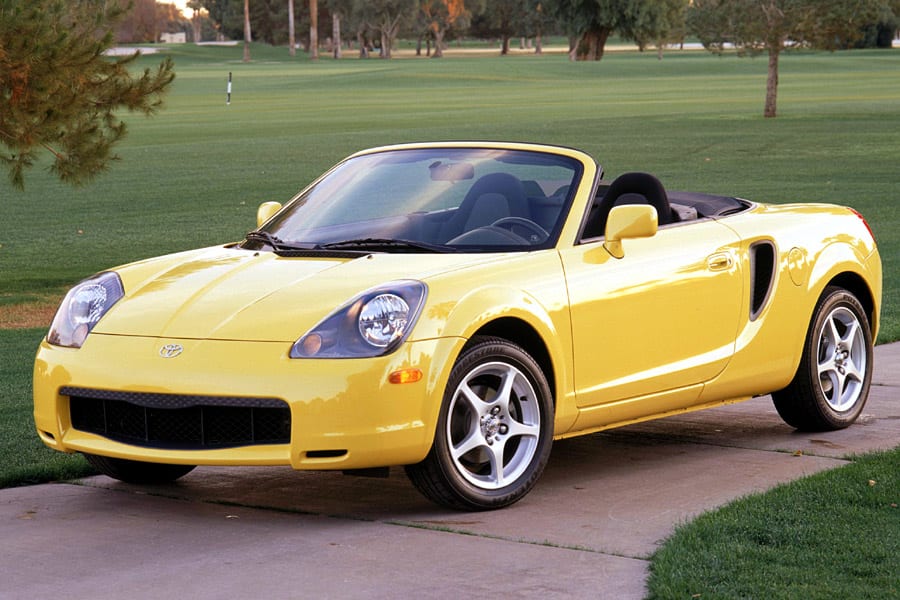 The third generation is a bubbly little go-kart that weighs just 2,100 lbs, has 138 hp, and allegedly, is an absolute blast to drive. Add in Toyota reliability and you’ve got yourself a great autocross project. Depending on the year, you could find one anywhere between $2,500-$8k, though we’d officially recommend the W30, which averages about $5k.

The 240SX is the epitome of a drift car. Like I said before, Nissan knows what they’re doing when it comes to weight distribution. The 240SX is a spunky little thing that suffered from the same problem as the Scion FR-S/Alikes; too little power for too much weight. The 240SX features a 150 hp four-banger and weighs about 2,700 lbs. While the stock cars aren’t terrible, much like the FR-S, the aftermarket is where it’s at. 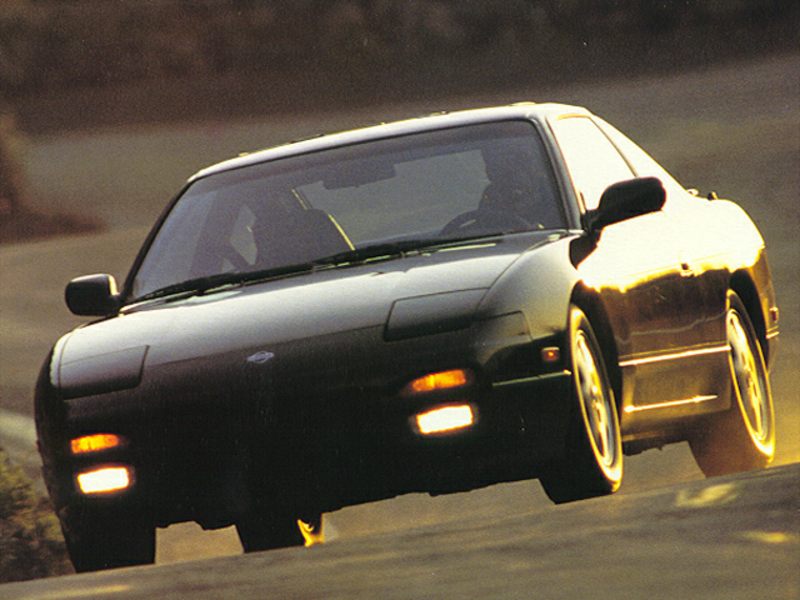 The 240SX is a great engine swap candidate, and a car capable of handling some wild builds. V8 swap? You got it. Need room for a turbo? It’s there. Want to stance it out with some spacers? Widebody kits galore. What about the exhaust note? It sounds like a stock car, but if you mess with the right parts? Oh man – she’s a screamer.

The best part? You can find one for as little as $2k, while nicer examples call for about $4,500. As far as cheap RWD cars go, this one is up there with the best of them, and it has the pedigree to prove it.

While the E30 M3 is an absolute icon, the soaring price points aren’t exactly doing us any favors on this list. Still, you can enjoy the performance and reliability of those German golden days with a 3-Series Bimmer from the same generation. They’re also insanely cheap, which leaves plenty of budget for shenanigans. While there are a few different engine choices here, a six-cylinder model is likely your best bet. The 4-bangers aren’t bad, but they’re quite underpowered, sadly. 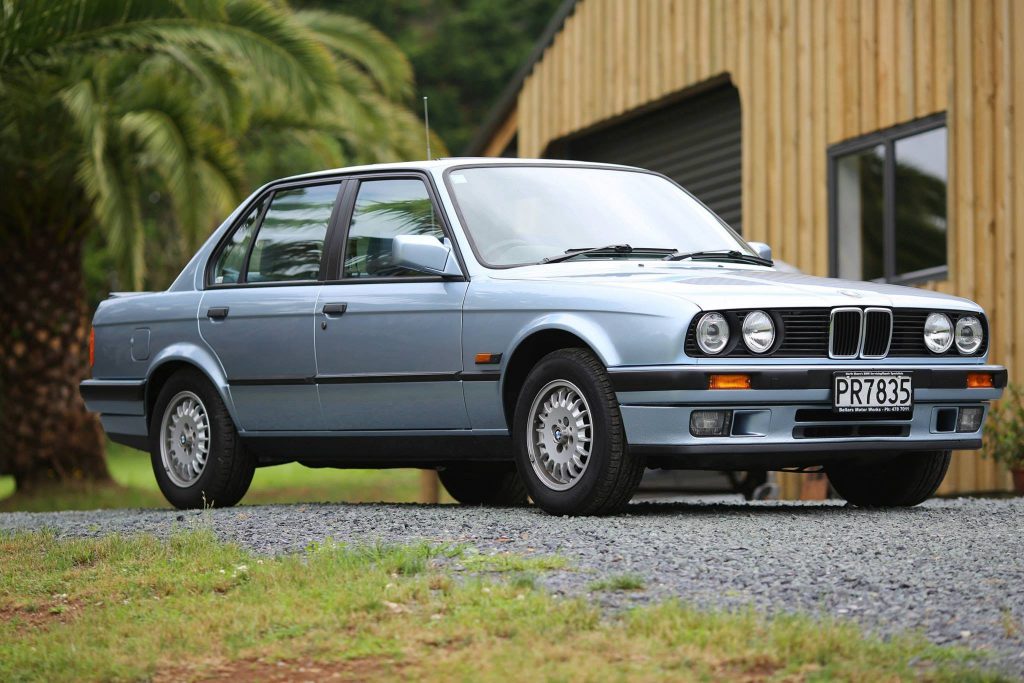 A few different six-cylinder engines are available and range from 123 hp to 168 hp. Expect to pay $2k-$4k for a 325i from this generation.

And we’re back at it with Nissan. HAVE I MENTIONED THEY KNOW A THING OR TWO ABOUT WEIGHT DISTRIBUTION? Seriously though, the 300ZX is not only sublime, it’s twin turbo-charged. It is not, however, the stereotypically reliable Japanese car we all expect it to be. 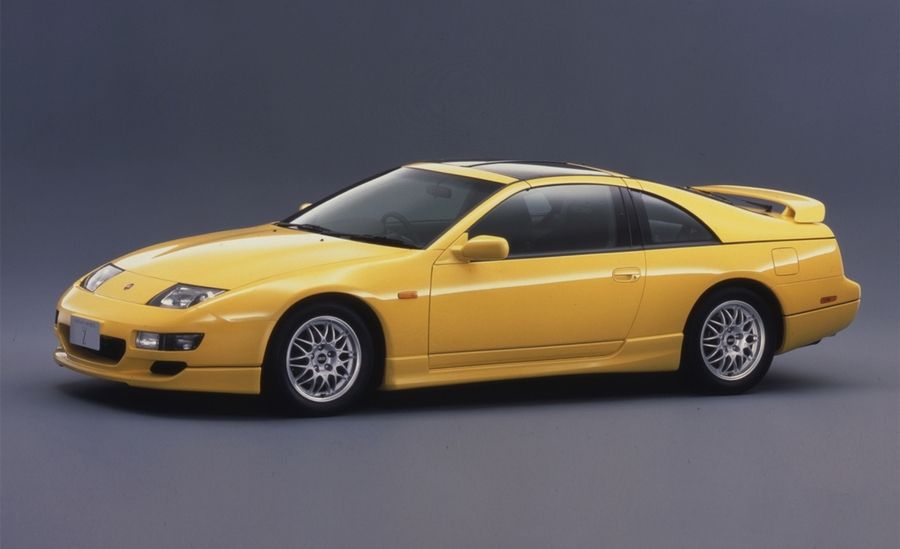 The 300ZX has quite a few common issues, so when buying one, think of it more as a down payment. You’ll very likely need to tune up some squirrely details at some point or other, but when she runs, she purrs. A used example can be found between $2,500 and $5k, so getting into the game isn’t too expensive, but staying in it can be a whole other matter…

Of course, the king is here. This is arguably the most sought-after, most reliable and coolest RWD sports coupe out there: The Honda S2000. This very collectible car was produced for ten years and fanboys the world over have been clamoring for its return ever since it left the market in 2009. The 2,800 lb roadster is graced by a 50/50 weight distribution, absurdly high redline, and a naturally aspirated (thanks VTEC!) four-banger as capable and reliable as they come. 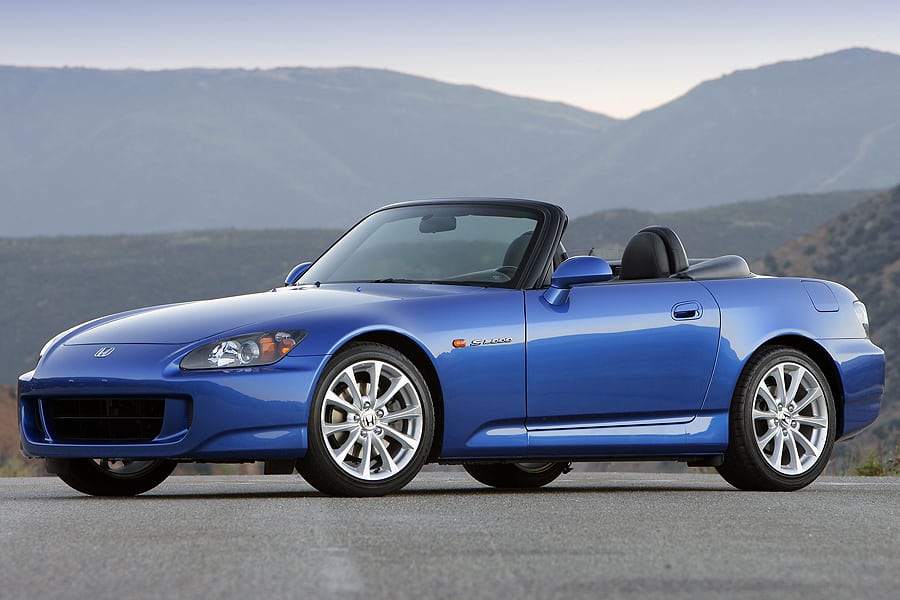 The car generates around 240 horsepower which means it is a worthy contender in the growing world of hot hatches and quirky cheap sports cars. It comes as no surprise that this is one of the more expensive cars on the list, but finding one for sale is going to be the hardest part. If you can find a corpse to pry the keys from, you should leave about $16,000 on its chest to reflect fair market value, of course.

The last car on our list comes from South Korea, and what a car it is. The successor of the cute and fun Tiburon, the Hyundai Genesis is a tame and proper sports car that likes to have a bit of fun. While newer models feature better looks,  more power, and refinement, the first generation is our focus, because money. With the Genesis Coupe, you’re offered the choice between a 2.0L 210 hp turbo I4 vs. a 3.8L 306 hp n/a V6. 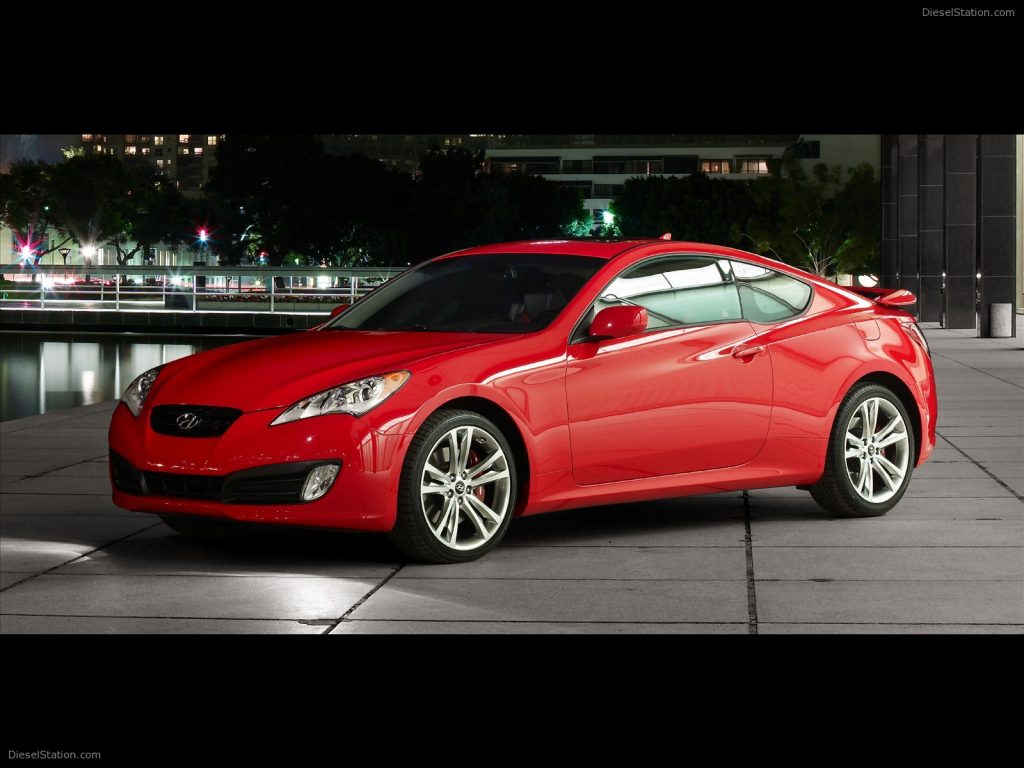 While the bright-eyed Hyundai came into the market hoping to show us what a Korean muscle car looks like, it largely failed to compete with American counterparts. That being said, it’s still a great car, and much more refined than its American counterparts, so nyeh. You can expect to find an example from the first generation in good shape around $11,500. 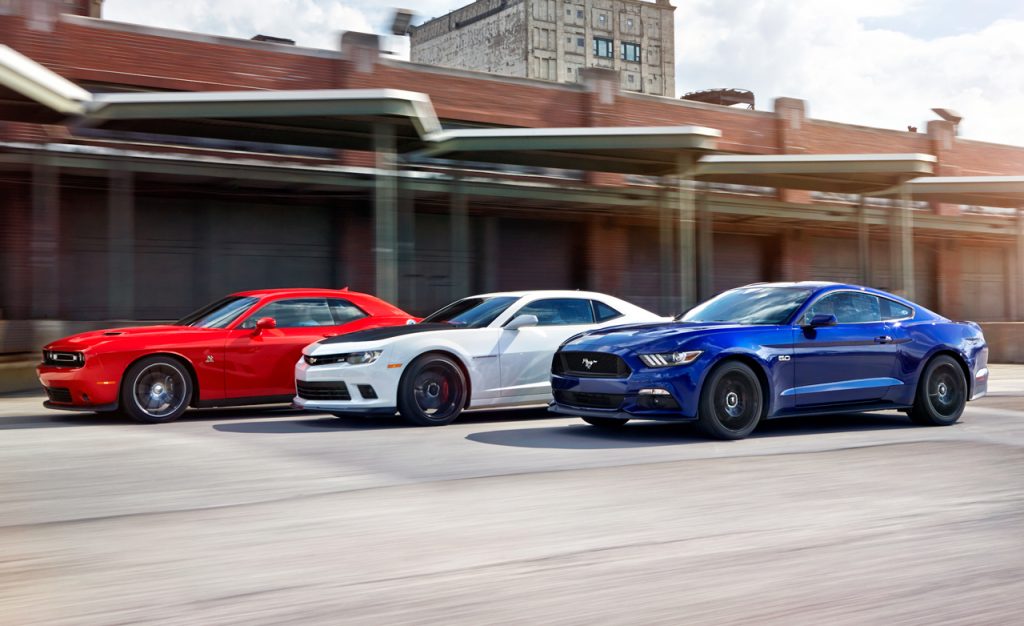 Honestly, all of these cars fall into the same category, and if you’re buying one, you already know what you’re after. While most would spring for a simple V6 variant and call it a day, there are plenty of older V8s out there looking for love, too. Hell, even the SVT Cobras from the 90’s fall into the ideal price range here, so if the muscle is your thing, more power to you (literally).

Well, there you have it, the top ten best cheap RWD cars. If there are any cars that didn’t make the list or if you’ve got some honorable mentions for us, let us know in the comments below!